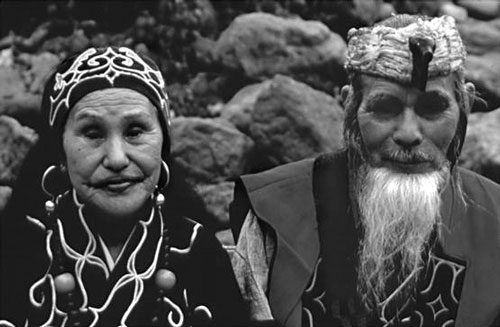 MANY TIMES, people-watching on public transportation in northern Japan during the 1990s and early 2000s, I thought to myself, “Gee, I look more Japanese than some of these people.”

Today I recognize that such observations reflect a topic that is familiar to Japanese readers but not to Japanese-American ones. People on trains can look “less Japanese” than I because my mindset of how Japanese should look is biased by the southern Japan roots of most JAs.

The more broadly varying appearances of present-day Japanese reflect varying genetic contributions from two main peoples along a north-south gradient: the Jomon and the Yayoi. While Japanese features today are predominantly of Yayoi origin, Jomon influences remain, mainly in the north (northern Honshu and Hokkaido) and far south (Okinawa).

The Jomon were the original aboriginal people of Japan. They are the ancestors of the Ainu, who have European-looking facial features and commonly, curly hair.

The Jomon and the Ainu have upper front incisors with straight sides that are aligned with their other teeth. Anthropologists term such teeth Sundadonts. Literally, they have “Sunda” teeth, which they share with aboriginal peoples living as far as the Sunda Strait separating the islands of Sumatra and Java in Indonesia.

By contrast, the Yayoi were the Korean rice farmers who settled in Kyushu from 400 BC. Their descendants built the kofun, huge burial mounds that dot southern Japan, during AD 250-600. Their upper incisors have “wings” on the sides that throw off their alignment. Such teeth are termed Sinodonts [“Chinese teeth”].

In the absence of photos of these ancient peoples, insight into how each appeared comes from the clay figures they made, which likely resembled themselves, and from their skeletal remains. Based on these sources, we can say that the Jomon had squarer faces, and were shorter, than the later-arriving Yayoi, who had slender faces, and were taller. The Yayoi were more “Asian-looking” than the Jomon.
The geography of the two types of Asian teeth shows that Sundadonts span a relic distribution: an older one disproportionately represented on remote islands. Their former middle ground, including China, Korea, and Japan, was overtaken by a later wave of Sinodont Asians.

All this arcana met reality, in the Pacific Northwest in 1996, when Kennewick Man—the ancient skeleton found in eastern Washington—was identified as, most likely, a Sundadont. His arrival accordingly long predated that of Sinodont Native-American tribes.
Dear reader, what kind of teeth do you have?

From Baekje to Lake Baikal