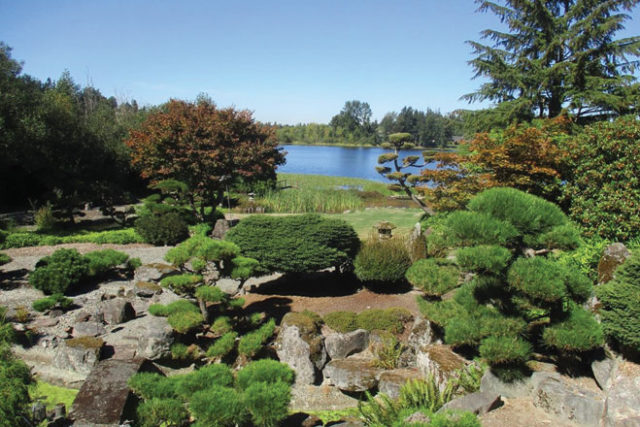 On the banks of Phantom Lake, hidden from public view, is a gem of a Japanese garden in danger of being demolished sometime next year. Landscape architect Koichi Kobayashi says the garden is of historic and cultural import on par with the Seattle Arboretum’s Japanese garden and the Kobuta Garden to the south. He’s on a mission to save Seko.

“I am looking for a great white knight, a saviour!” exclaims Kobayashi during a recent interview in a Queen Anne coffee shop.

Kobayashi found out about Seko Garden while researching gardens created in Manzanar, Minidoka and other concentration camps used to imprison Japanese Americans and Japanese immigrants during World War II. He found a book that had two pages on Seko Garden. That was the first he had heard of it. “I had talked to Roy before he passed away. He never mentioned the garden,” Kobayashi said. “I had no idea. No idea!”

Seko Garden is on the property of Joan Seko’s Bellevue home. Joan and her late husband Roy used to own the Bush Garden restaurant in the International District. Seko is planning to put up the house for sale next spring. Kobayashi and others assume that the buyer will opt to rebuild the modest home and get rid of the garden. Here’s why Kobayashi thinks that would be a shame:

The garden was conceived and designed by Kaichi Seko, Roy’s father, in the 1950s. Kaichi was imprisoned in Minidoka during World War II. “Kaichi must have seen or was associated with the building of these gardens,” Kobayashi wrote in a missive about the garden. “At the camp at the same time was Fujitaro Kubota, who later returned to Seattle and built the lovely Kubota Japanese Garden in south Seattle.”