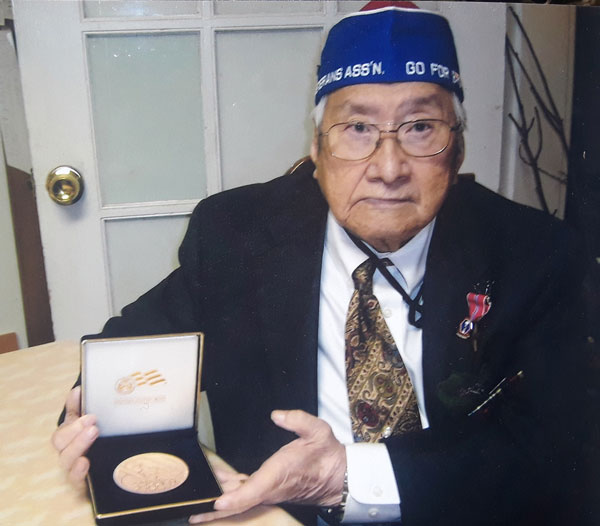 Edy Hideyoshi Horikawa celebrated his 100th birthday on August 14. The Nisei veteran and his wife, Norigiku, hosted a drive-through and sidewalk viewing party, where light refreshments were served.

Mr. Horikawa was born in the back of Horikawa Hardware, formerly on Maynard Avenue South, Seattle. After graduating from Highline High, Burien, he worked for the Civilian Conservation Corps. From there, he was sent to the Heart Mountain internment camp, Wyoming. At Heart Mountain, he volunteered for the US Army, and trained at Camp Shelby, Mississippi, where he was promoted to Sergeant First Class. From there, he was assigned to the 442nd infantry combat team, with whom he served in Italy and France.

For his service, Edy received four medals: two Purple Hearts, one Bronze Star, and the Congressional Gold Medal. He received his honorary discharge at Fort Lewis in 1946.

In 1952, Edy entered the UW, where he received his BA, and began teaching art at Seattle Central Community College. In 1959, he returned to the UW to obtain his Master’s degree in fine arts. It was there that he met Norigiku, a student from Japan. They married that same year, after she completed her studies.

From 1964 to 1972, Edy worked as a visiting professor at the University of Tokyo, where he taught business English. While there, he studied Japanese flower arranging and received a teaching certificate in it. He also studied Jodoshu Sect Buddhism for seven years, and received a Jodoshu Priest certificate as well.

In 1972, the Horikawas returned to the US, and Edy began work in the art department of Boeing, where he remained until 1987.

Edy’s art works are kept in the permanent collections of the Henry Art Gallery, UW, and the Seattle Art Museum.

The 150 Year History of Nikkei Immigration