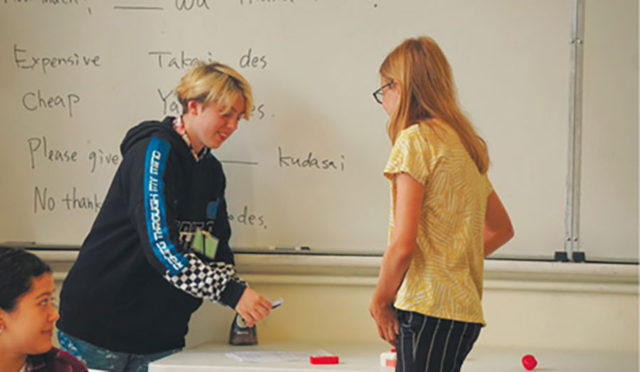 This year marked the seventh annual Japanese Summer Camp! For Japanese Cultural Community Center of Washington (JCCCW), this is something we hold dearly to our hearts. Being given the opportunity to share Japanese culture with these kids and to see them become really interested and excited to learn more is something special. The first week, for campers aged 6 to 12 was held July 15-19th, and the second week for ages 13 to 16 was held July 22-26th. It was our first time splitting the camp into two different weeks to compensate for our growing number of participants (woohoo!) and their wide range of ages. It turned out to be a great experience for the kids and us!

Each morning, the campers attended Nihongo, or Japanese language class, similar to that of last year. They learned grammar, simple vocabulary, and common phrases, such as, “Ikura desu ka,” which means “how much is this?” By the end, we thought several of the campers could become professional hagglers in the market! They had several Japanese culture activities in the afternoon, such as taiko (traditional Japanese drum lessons), calligraphy, karate, and dressing up in Yukatas!

A favorite activity among the campers in both the older and younger groups was the Furoshiki making workshop. First, the campers were given fabric markers so they could draw designs on their Furoshikis. Every camper made their own unique design, some drew Japanese cherry blossoms and others displayed their skillful manga craft! Then, we taught them how to use their Furoshiki in 7 different ways, so they could carry books, bottles, use it as a purse, and even carry a watermelon! They learned the 7 different tying techniques very quickly! It was almost as exciting for us to see the campers apply what we taught them in the workshop, as it was for them to learn. The best part was seeing campers use their Furoshiki for wrapping their lunch or their personal items and carry around their Fursoshiki for the rest of camp.

Another popular activity among campers was the Paper Sumo, or kamizumo, a traditional Japanese game that imitates sumo wrestling with two paper figurines in a ring on a cardboard box. The game is played by placing the two opponents facing each other in the ring and then tapping the box with your fingers until one wrestler touches the outside of the ring or falls over. Campers made their own paper Sumo wrestlers and gave them strong, intimidating names like Fire Monkey. Then, they competed in a tournament. The last game was intense, everyone gathered at the table to cheer on their favorite wrestler. However, only one sumo prevailed!

In addition to these activities, the campers also learned about the history of Japanese-Americans. Many were curious and were unaware of the details of important historical moments such as the Japanese Internment during WWII. While others were excited to share their own family history and really enjoyed making the connections between our Staff’s presentation and their own history.

During the last day, we had a graduation. It was sad to see the camp come to an end, but we enjoyed seeing how excited all the kids were to show what they learned. We dressed them in Yukatas and set up water yoyo fishing just like a Japanese Matsuri. Some of the campers performed Kamishibai (traditional Japanese storytelling method). They were able to use the skills they learned in the Japanese language class, and many in the second week were able to read their part of the story in Japanese!

Thank you to all the campers, volunteers, instructors, and J’s staff! We hope the campers had as much fun as we did and we cannot wait to see what next year will bring!