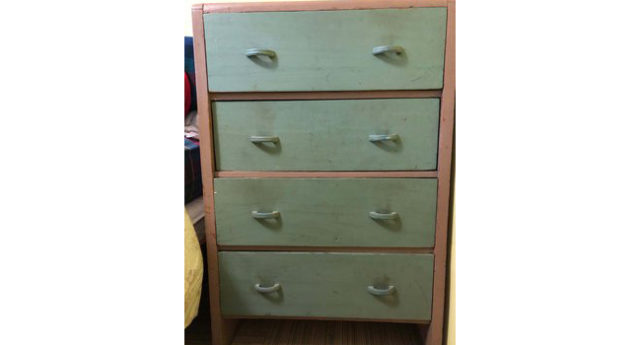 “If there is joy, it is a painful joy.” —Karen Tei Yamashita, “Konmarimasu”
I call it the camp dresser because it was made in camp. As far as we know, anyway. The camp dresser was in my Auntie Sadako’s house in a closet for years.

She and my uncle are downsizing, preparing for a move. Thanks to the help of some friends with a truck, the dresser’s now been moved from the San Francisco Bay Area to our house in Tacoma. What my auntie knows about it is that it was made in camp, but she doesn’t know much else about it: how she ended up with it, or who made it, or even in which camp.

How to explain my need to defend Marie Kondo? She is a hugely popular cultural phenomenon, a professional organizer with a large and dedicated following. She does not need my defense.

Maybe it is the number of writers and book lovers (my people!) who began to attack her, for mischaracterizing her method as minimalist, for being anti-books. Some, like American writer Margaret Dilloway, say you have to understand Japanese culture and its Shinto roots and Kondo’s history as a Shinto temple attendant in order to understand her method. Others, like Japanese cookbook author Makiko Itoh, say that you have to understand Japanese context which is not necessarily the same thing. Though Japanese visual aesthetics might be known for a certain minimalism, says Itoh, many homes in Japanese modern society are havens for clutter.

You could call my need a loyalty, though that’s a complicated word for Japanese Americans (also my people!). Questions of loyalty, national and individual, have divided our community many times over.

The four drawers on the camp dresser are painted a muted green, the top and frame khaki. It looks like it’s pieced together out of many 2’x4’s. “That looks like the bottom of fruit crates,” my friend Bif Brigman tells me after I send him a picture. And that would make sense; my family was a sharecropping family during the Depression, working on orchards and farms. Those wooden slats look familiar. I’d know them anywhere, coupled with those empty packing crates for table grapes we found in my Auntie Nesan’s woodshed after she passed away. More things kept, not thrown away, for decades.

Perhaps we could call my loyalty to Kondo an affinity: a wistful longing to share roots and cultural heritage with this Japanese woman who is an empire of kawaii, who has taken American bookshelves, our sock drawers, our think pieces, and now our Netflix accounts by storm. (But here I run into problems, already. I do not want to describe the vast reach of her cultural impact by resorting to yellow peril imagery, to xenophobia.)

Call it an unwarranted but insistent surprise at the tone, the tenor of the attacks at Kondo. I also pay attention to how people refer to Kondo as cute or adorable; I have also been called those things as an adult woman, which can be a liability to being taken seriously. Better yet, call it an attention to representation: call it a knowledge of the complicated history of being an Asian woman in an American context. My training in American ethnic studies, which insists on looking at the power relations in the histories we circulate and uphold and bury.

Inside the topmost drawer of the camp dresser, there’s a nail sticking out. I’ll need to nail it down eventually.

Representation, recognition: those begin to explain my feelings about the second episode of Tidying Up, the Netflix show that features Kondo and her method.

I watched what I now call the “JA episode” of Tidying Up with my two Yonsei daughters; the series calls it “Empty Nesters.” It struck me that we had never watched a television program together that features Japanese and Japanese Americans, where the characters are speaking both Japanese and English. They have seen Japanese cartoons such as My Neighbor Totoro, but those are dubbed over in English. The fluidity between Japanese and English here, thanks in part to Kondo’s amazing translator Marie Iida, does not faze my daughters.

After an opening shot of cherry blossoms, a tanuki figurine is the first thing that appears on screen. Wendy Akiyama is calling for the family cat, Mushu. “The people today are of Japanese descent,” Iida says to Marie Kondo in Japanese as they walk up to the house. “Oh, really?,” replies Kondo. “That’s very Japanese,” she says, and the camera shows a stone Japanese lantern outside. “Oh, but there’s no koseki outside,” she says.

As Kondo and Iida enter the house, the Akiyama family and their belongings feel so incredibly familiar. I thought my family was the only family that kept everything, but the Akiyama household looks so much like homes in my family. Not many clear horizontal surfaces.

Warm and friendly, Wendy Akiyama is doing her best to put Kondo and Iida at ease: she is also throwing out a few words in Nihongo, as I sometimes do with Japanese friends, to try and connect with the two Japanese women. The son Russell is also familiar, the filial son who has studied Kondo’s method already and is anxious to put her tenets into place. Ron Akiyama, the husband, is also familiar—a man who speaks very little at the beginning of the episode, whose early words are “Ditto everything she just said,”—but whose transformation is perhaps the most moving by its end.

The handles on the camp dresser are mass-produced, Bif says, but the craftsmanship on the dresser itself looks handmade. There are no markings on the drawers that would provide a clue to the maker.
We think that perhaps my grandfather Junichi Nimura made the camp dresser. He was a woodworker, and my father’s unpublished book talks about the furniture that my grandfather made to help make the family more comfortable in camp: to make the barracks into a home.

In the Akiyama episode of Tidying Up, some of my Japanese American friends cried when the family sat together in the house’s entryway, sitting seiza to greet the house. “I recognized them so hard,” said my friend Susan Ito, meaning that she saw several layers of familiarity in the episode. Susan is a Japanese American writer from San Jose, California, and she echoed the sentiments many of my Japanese American friends seemed to feel as well. At that moment—a version of which appears in every episode—the meditation was about the creating and holding of a space, which is especially important when someone has experienced trauma. But I think many of us recognized the intergenerational trauma evoked when Ron Akiyama finds the diary that his father kept about their forced removal to Santa Anita racetrack, and explains its history to Kondo. The diary had been buried for decades, and he never knew of its existence. He’s a different man at this point, one who takes an active role in “tidying up,” but also in explaining more to the viewers and Kondo. He and Wendy seem to share equal time explaining the situation to us.

I’m not sure if Kondo knows much about camp history, but it’s clear that she’s watching Ron Akiyama’s face very closely. The look on his face is not joyful—Kondo’s method famously encourages its users to keep objects that “spark joy.” But if it is not joy, it is something else that moves her in that moment.

“This is an item to be cherished,” she says, gently.
And with that statement, Kondo seemed to recognize so many of us who inherit our family’s clutter and cluttering tendencies, so many of us who keep and accumulate because our families lost near everything. I felt my clutter recognized and normalized, rather than something to be ashamed of. That’s when I cried.

The drawers on the camp dresser don’t really hold anything at the moment. It’s hard to pull the drawers in and out at all. Any attempt to pull one drawer out means an inevitable jostling to push it back in. Taking one drawer out might mean taking it out all the way. It might mean patiently easing the drawer from side to side, from top to bottom, until it’s back in place.

The camp dresser is messy and empty and it’s been passed down through decades of dusty floors and cluttered closet spaces. Still, though, it’s survived, and it’s in our home now. It’s part of my inheritance. So fragile, but so resilient: to be cherished.
I’m sure there’s a metaphor for camp history here.

[Editor’s Note] This article was originally published in Discover Nikkei at <www.discovernikkei.org>, which is managed by the Japanese American National Museum in Los Angeles.

Tamiko Nimura is a Sansei/Pinay writer, originally from Northern California and now living in the Pacific Northwest. Her writing has appeared or will appear in The San Francisco Chronicle, Kartika Review, The Seattle Star, Seattlest.com, the International Examiner (Seattle), and The Rafu Shimpo. She blogs at Kikugirl.net, and is working on a book project that responds to her father’s unpublished manuscript about his Tule Lake incarceration during World War II.

Walk It Off: True Grit and “Gaman”

Waves of Pandemics and the Prewar Japanese Canadian Community

A Conversation with Aya Hashiguchi Clark on the Past, Present, and Future of Japanese-American Theater

The Unseen Price of Redress

Fighting Fear on the Day of Remembrance