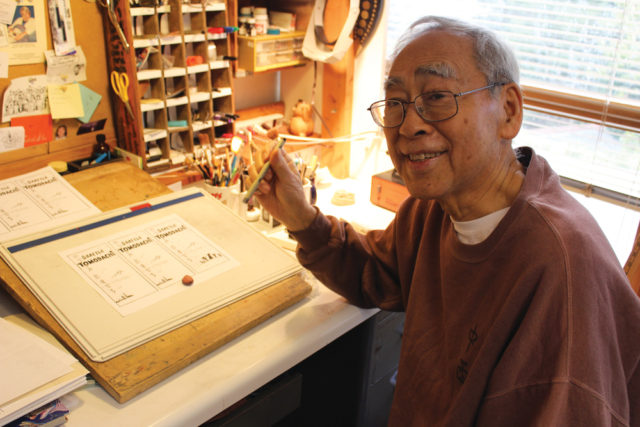 Sam Goto drew his Seattle Tomodachi strip for five years. He passed away on New Year’s Eve 2017, but he left the North American Post with enough new comic strips to last well into 2018. For five years, Sam told mostly true tales about Nisei life in the Pacific Northwest. His strips were funny, whimsical, silly and sometimes a little serious or sad. But collectively, they tell a story of what it was like to be a new immigrant to the US, what the community did to maintain its culture and values, and how, little by little, people would assimilate into the mainstream culture.

Sam worked in the Medical Dental Building in downtown Seattle as a dental technician until he was 82. He released a book in 2011 titled My Fifty Years in Seattle’s Medical-Dental Building that, of course, includes lots of his drawings.
The North American Post sat down with Sam and his wife Dee to talk about Seattle Tomodachi just before Thanksgiving 2017. It would turn out to be one of the last days Sam felt completely healthy; so looking back on that visit, we cherish the time we had with Sam and Dee discussing his work and life. Excerpts from the interview follow.

NAP: I understand you were inspired by Walt Disney.

Sam: Yes, when I was about 6 years old. That’s a long time ago. Snow White & the Seven Dwarfs and Bambi inspired me.

NAP: Where did you grow up?

Sam: I didn’t grow up in one place. I moved around a lot. When the war started, we lived in Bully Creek, near Vale, Oregon. Those years were real tough because there was a lot of prejudice. Man, I thought we were the worst race of people in the world. I would get beat up. If they were bigger, I would fight back. I got called names when I was nine or 10 years old. It’s not a good feeling. That’s supposed to be one of the most impressionable ages.

In high school, I did football and track. At the College of Idaho, I ran track with RC Owens (later a star with the San Francisco 49ers in the National Football League). He was a skinny guy. We were a two-man track team a lot of times. He was quite a guy. I lost track of him. He didn’t practice track, but he could outrun me.

Two years into college, I got drafted. I was in Germany. I was with the 95th Combat Engineers for awhile, and then I got called up to 7th Army Headquarters in Stuttgart, Germany, and we had control over the whole army over there. It was a big deal. To set a good example, we had to pull KP and all these things while other people hired Germans to do that. It was a pretty good job. I was a design draftsman.

NAP: Then you came back to Seattle. How did you make a living?

Sam: I was a dental technician. I had a dental lab in the Medical Dental Building. I worked there about 55 years. At 82, I finally retired. Basically, it was a one-man shop. It was good that I had a little business, because I learned about how businesses have to operate. A lot of people don’t understand what businesses have to go through. Small businesses have to go through all the crap that big businesses do. I had to put a back-flow valve on the sink, I had to put a trap on this thing or that… I was by myself. I would see patients once a day, or twice a week, but I had to have an exit sign on the door. It was dumb!

NAP: At the end of your career, you were already writing Seattle Tomodachi. How long have you written the comic strip?

Sam: Five years. Isn’t that something? She (points to his wife, Dee) got me started. She wanted to get some advertising in the Post, so my comic strip was supposed to be in exchange for her advertising. I got talked into doing it. I had never done a comic strip that much. Anyhow, it’s been pretty good. I think we’ve helped the paper.

NAP: How did you come up with the concept of focusing on the first Nisei in Seattle?

Dee: I interviewed him. I have a tape of him. I got a job at the University (of Washington) to start the archives for the Japanese collection. I am actually a nurse. At first I said no because I had no interest in history, but Sam talked me into it. That’s why I know so much, because I went and interviewed about 30 of the Issei. When I started working there, that was 10 years after we got married, we found out that his grandfather and my grandfather were best friends. And my grandfather stayed up all night with him when his grandfather died. They were really close.

NAP: Wow. And you had no idea that your grandfathers were best buddies until 10 years after your marriage?

Dee: I was born a few miles from where they lived. We didn’t know about that either. The old people never talked about their hard times. So they never told us the stories. Sam and I met in Seattle.

Sam: At one time, Seattle Tomodachi was going to be about Shigeru growing up. But then we watched some TV program where this cartoonist said he wouldn’t let his kids grow up. After that, we decided, he’s probably right. We don’t want them to grow up. But then he grows in different areas. In other words, he’s not at the age where he started; he’s at different ages.

Sam: Right. You can go anywhere you want. I tried to keep a lot of historical stuff and our Japanese values and customs.

Dee: There was a debate about the incarceration.

Sam: There’s very little about the incarceration. I wanted to stay away from that. It gets too political.

Dee: He doesn’t want to put humor into it.

NAP: And the strips are based on true stories?

Sam: Most of them are based on something true. That’s why I might run out someday.

NAP: How would you characterize your style?

Sam: My style is pretty subtle. One of the guys at the paper said it made him smile, and that’s good enough for me.

*This article is retrieved from Seattle Tomodachi Special Edition, which was published on March 10th, 2018

Samurai Shigeru – The Art and Wisdom of Sam Goto is soon available. Reserve to purchase the book to make the publishing sooner: