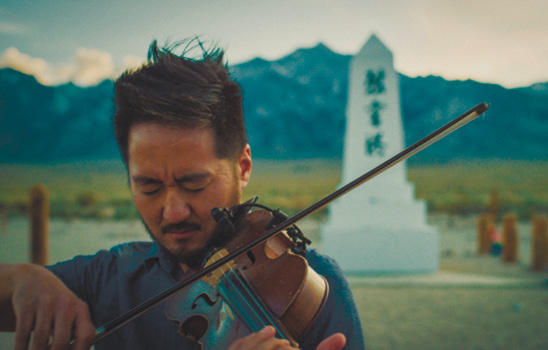 Kishi Bashi is gaining popularity across the US with his distinct mix of electronic orchestral sounds, high-pitched but subtle singing, and lyrics that paint a peculiar view of the world interwoven with Japanese. He performed earlier this summer in his hometown, Seattle, when he took the time to talk to us about his new album and share some interesting stories.

Music that has affected him

My parents met while they were attending University of Washington. We moved to Ithaca, New York, soon after I was born, and that’s where I spent my early years. There was a big Suzuki violin school, and that’s where I was first exposed to the violin. The founder, Shinichi Suzuki, was from Matsumoto City, Nagano Prefecture, had created what is still today the most famous violin classroom in the US. After we moved to Virginia, I continued to play classical music through high school. But then I got into jazz violin, and when I got to university, I continued with jazz.

For Americans, no matter how we are raised, I think American music such as blues and country music greatly influences us. Even if you don’t want to hear it, the music plays on the radio. I am an American, so it goes without saying that traditional American music styles have had a big impact on me.

It is difficult to define the genre of my music. As a songwriter, I always try to make something unique. I layer all sorts of string textures, and try to make music that is enjoyable and different from everyone else’s.

I started producing this album at a time when it felt like US politics and race relations were in a crisis. I used the presidential decree during World War II that led to the incarceration of Japanese living in the US and Japanese Americans as my theme. I think what they went through at the time and what American minorities are going through now seem very similar. All that has changed are the targets: Muslims and Mexicans. When races and religions are all mixed together, if we don’t try to get along, then people who should be fellow Americans like Japanese Americans begin to be feared as the enemy. I feel we’re headed toward repeating the actions of the war. That’s why the name of my album is “Omoiyari,” which means “compassion” in Japanese.

I actually went to visit what’s left of the camp at Heart Mountain in Wyoming and listened to the experiences of those who were affected. The songs “Summer of ‘42” and “Theme from Jerome (Forgotten Words)” came from me imagining how these sorts of things probably happened a lot. What I was trying to express was “love and loss.” It’s a universal theme, so whether it’s something that happened more than 70 years ago or today, you can conjure up the same empathy. I wanted to compare what happened then with what is happening today and connect those emotions.

As an extension of the album, I am also making a film that I plan to release around the time of next year’s presidential election. The film doesn’t only look at the issue of concentration camps; it also touches on the battles in Okinawa. My mother is from Okinawa, and my great aunt was a Himeyuri student who was forced to join a student nursing corps during the fighting. This happened in Okinawa too. War is truly horrible. Knowing history, I want people to show compassion for today’s young people, too. If we do, prejudices will disappear. That’s the goal of this project.

The song “Violin Tsunami” that I recorded for this album came from the motif of my violin, which was made for me by my friend, a Japanese-Brazilian violin maker. The violin is named “Tsunami” since he was making it while the Great East Japan Earthquake hit. He finished the violin with images of the Fukushima nuclear accident and thoughts for all the victims going through his head. This song is about the chaos that nature can unleash, and the recovery and the ability of people to stand up again.

I am an American, so I really didn’t understand the Shinto concept Japanese people have of all things having a soul. But when I play this violin that he made with such intense emotions, I think I begin to understand little by little the Japanese sensibility.

As for weaving Japanese into my lyrics, I don’t really have a reason. It’s just a feeling.  My wife is Japanese, so I have her check to make sure the Japanese isn’t weird. My wife is also a jazz violinist, and we met at Berklee College of Music.

I love Seattle. The summers here are great! After all, this is where my parents met. I’ll be back soon, and I hope you’ll look forward to my visit.

Kaoru Ishibashi (Kishi Bashi for short) is a second-generation Japanese American from Seattle. After graduating from the Berklee College of Music, he became a multi-instrumentalist and singer/songwriter and launched his band in 2000. He has written music for American Express and many other commercials. He debuted in Japan in 2012 with the album “151a (ichigo-ichie).” His sixth album, “Omoiyari,” was released this May 31, followed by a US tour. Today, his home base is in Georgia.

OMOIYARI by Kishi Bashi Released on May 31st, 2019

Interview with Ken Taya aka ENFU