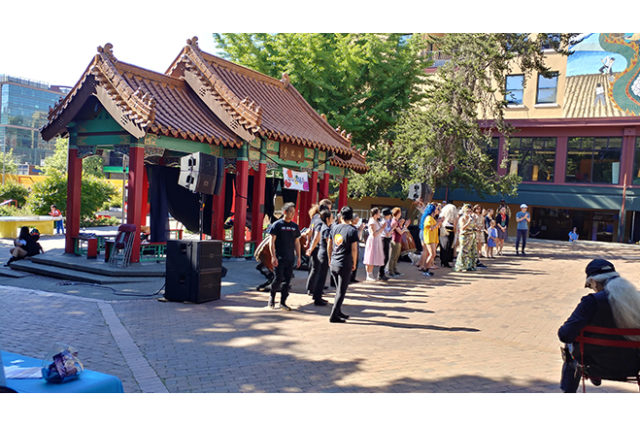 The 7th Annual PRIDE Asia event took place Sunday afternoon at Hing Hay Park. PRIDE Asia was created to celebrate both Asian Pacific Islander Heritage Month in May and kick off LGBTQ Pride Month in June. The event consisted of performances and presentations aimed at raising the visibility and creating safe spaces for LGBTQ identifying Asians and Pacific Islanders. The Master of Ceremonies was Aleksa Manila, founder of PRIDE Asia, and the keynote speaker was Jill Mangaliman, a queer Filipino American organizer and executive director of climate justice organization Got Green.

The presenters introduced the services available through their organization, and raised awareness about current LGBTQ issues in the city and state, such as the nationwide push to ban “conversion therapy” as well as recent City of Seattle ordinance that makes all single-stall bathrooms gender-neutral. There was by Shirley Shimada, For The North American Post Shirley Shimada (left) and her friends at Jigoku Onsen, Beppu in 1961
PRIDE Asia Event , From page 1 also attention given to the unique issues faced in particular by LGBTQ Asians and Pacific Islanders, including mental health and higher rates of undiagnosed HIV.

The performances included a mix of traditional and modern performances, with many artists of diverse racial, sexual, and gender identities choosing to blend both traditional and contemporary styles. A multi-generational, multi-racial audience enjoyed traditional dances and songs as well as hip-hop and spoken word performances, and performers had a chance to talk about the cultures that inspired the dances—for example, a Filipino dance was contextualized in the history of Mindanao, a heavily Muslim region in the south of the Philippines. The closing performance was a combination taiko performance by Seattle Kokon Taiko and contemporary dance performance of “Farewell Shikata ga nai” led by Gabrielle Nomura Gainor, representing the experiences of Japanese Americans incarcerated during WWII.