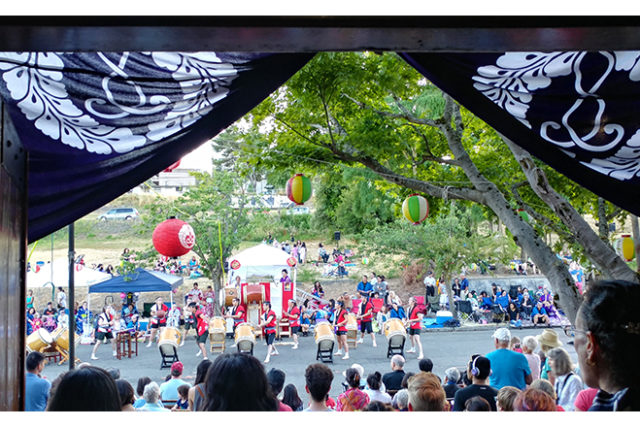 The traditions of Obon season in the Northwest are relatively new compared to the centuries-long practice of observing Obon in Japan, but it has become a central part of celebrating Japanese culture in our region. Though many in the community are already familiar with the holiday, there are many surprising facts in the cultural history of Obon festivals.

Rooted in Japanese Buddhism, Obon refers to a holiday season that honors and celebrates deceased ancestors. Bon Odori, or literally “bon dancing,” refers to the dances performed as part of a festival that traditionally takes place during Obon. Everyone is welcome to attend Bon Odori festivals regardless of affiliation with the Buddhist faith. This year marked the 86th Seattle Bon Odori. Held in late July at the Seattle Buddhist Temple, also called Betsuin, Seattle Bon Odori kicks off the Obon season in the Pacific Northwest. White River Valley, Tacoma, Olympia, Ontario and Portland also hold their own festivals on the weekends following Seattle.

According to Dr. Wynn Kiyama, curator of the American Obon exhibit at the Oregon Nikkei Legacy Center, the tradition of festivals held during obon are thought to have their origins in more ancient celebrations that occurred during the harvest season in Japan. He also notes that the establishment of Obon practices in both the U.S. and Japan as we know them today are not universally agreed upon with many competing theories and versions being popularized—the history of Obon is as complex and interesting as many of its practices.

Obon festivals in the Northwest each feature different food, atmosphere, music and performances. White River Valley Bon Odori, which I attended for the first time this year, is famous for having the atmosphere and scenery of a countryside Obon festival. And festivalgoers can eat spam musubi at any Obon festival in the Puget Sound area, but yaki onigiri is a specialty in Seattle, while unagi bowls are popular in Tacoma. Tanko Bushi, recorded in 1932, is the most well-known song both locally and globally, though Soran Bushi is also popular in the Puget Sound region. Local Obon festivals also feature newer, regionally specific songs such as Seattle Omoide, Tacoma Ondo, and Portland Ondo.

Although Obon in Japan is observed according to either the lunar or solar calendar depending on the region, Obon season in the Northwest typically schedules events spaced one week apart from each other starting in July as the festivals also serve as major fundraisers through food and merchandise purchases for the Buddhist temples that host them. Though today they are associated with the Buddhist temple, the observance of a festival during Obon season actually predates the construction of the current Seattle Betsuin. Before World War II, Obon festivities were marked as an annual summer parade on Main St., and Nikkei farming families from around Puget Sound would drive from out of town or take the ferry into Seattle to celebrate their one day off during the harvest season.

While Obon itself is a Buddhist holiday observed by many Japanese Americans, the local festivals associated with it are multicultural events attended by community members of many different races, religions and backgrounds. Non-Japanese attendees already familiar with the event wear traditional yukata, while others are introduced to Japanese culture and celebrations through Obon festivals. And while Obon in Japan is a holiday traditionally focused around returning to one’s hometown, family reunions, grave visits and honoring ancestors, Obon in the U.S. is about all of the above and more: remembering deceased loved ones, reuniting with family and friends, and bringing together a community over a shared love of food, dancing and culture.

Being of Japanese ancestry was not always as celebrated in America as it is today, but here in the Northwest Obon season is a chance for everyone to share their own way of celebrating a Japanese tradition. Japanese Buddhist temples in the U.S. have meaning beyond the Buddhist religion as significant gathering places for both descendants of early Japanese immigrants and more recent Japanese immigrants to the Northwest, and events such as Obon continue to bring together people of all races to celebrate not only the ancestral holiday but also the spirit and dedication of the Northwest Japanese community.