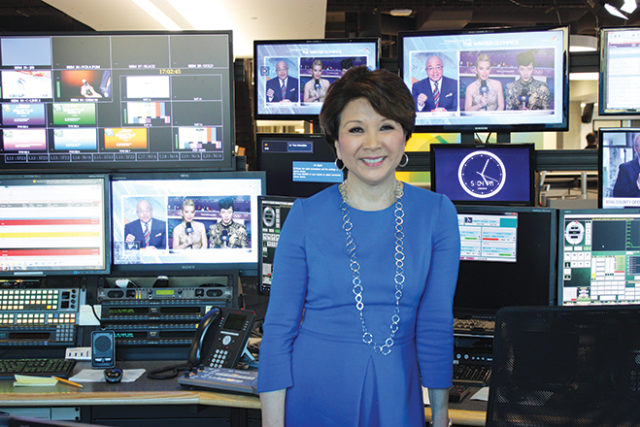 As a teenager, Lori Matsukawa was prompted by friends to enter a beauty contest. She did, and it sent her on a life path that has included 35 years at Seattle’s KING 5 and a lifetime of giving back to the Japanese American community in Seattle. As Miss Teenage America, she traveled the country and was interviewed wherever she went. She thought journalism was the career for her. The North American Post sat down with the KING 5 anchor to talk about her career as a pioneering Asian American female journalist in the 1970s and 1980s and to look back on the many ways she has given back to the Japanese American community in Seattle over the years. Excerpts from the interview follow.

“you can accomplish a whole lot of things by joining others and working for the community’s benefit. ”

Lori Matsukawa anchors King 5 News at 5 pm, 6:30pm and 11pm. She joined King 5 in 1983. She graduated Phi Beta Kappa from Stanford University (BA) and from the University of Washington (MA). She received the “Lifetime Achievement Award” from the Asian American Journalists Association (2005), and was inducted into the University of Washington Communication Department’s Alumni Hall of Fame (2012).  She and her husband live in Bellevue, Washington.  They have a grown son.

What was it like starting out as an Asian woman in journalism?

By the time I was out of college, Connie Chung and Tritia Toyota were on the air in Los Angeles. Wendy Tokuda, who is originally from Seattle, was in San Francisco. So there were Asian American women on the air in the mid to early seventies. I looked up to them as people I could emulate, people who looked like me, working in big cities. I just wanted to do the work primarily because I thought it was fun and exciting. I learned something new every day, which is what I really wanted out of my job. I wanted to share what I learned with the audience.

Did you start off as a reporter?

Wow, you were editing 16mm film. Is the work easier now that everything is digital?

What was it like looking for work out of college?

In college, I majored in communication and for two summers, I would go back to Hawaii and intern as a reporter for the Honolulu Advertiser. I always intended to be a reporter for a newspaper. Then I did an internship at KPIX, which is a TV station in San Francisco. That’s where I ran into Wendy Tokuda. She took me under her wing and let me tag along with her on stories. She was an inspiration and very encouraging to me. I was able to put together a videotape of me reporting on earthquakes. I used that to look for a television job when I graduated. I sent my clips out to look for print jobs. I sent out 100 letters, and I only got two positive responses. One was from the Los Angeles Times – who would have thought? – and the other was from a television station in Redding, CA. I wrestled with it because who doesn’t want to work for the Los Angeles Times? But I thought the television job would be something to do when you’re young and strong and could carry all the gear. So I thought, well, I’ll do television first, and then when I get wrinkled and toothless, I’ll be a print reporter. That was my plan, but I’ve just been doing TV ever since.

Let’s talk a little about all the community work you do. First, you helped form an association for Asian journalists, right?

When I came to Seattle, a friend of mine from college who I had worked with on an Asian American newspaper said, “Hey, I’m going to start an organization called the Asian American Journalists Association. We’re going to have chapters all across the country. We already have a chapter in Los Angeles and San Francisco. Seattle will be the third.” (The AAJA now boasts 21 chapters and more than 1,700 members. Get more information at http://www.aaja.org). There was a time when we realized we had to work together to increase visibility of Asian American journalists and support those who were already in the industry by improving their professional skills, helping them with scholarships and also being a watchdog on coverage of Asian American issues. During that time, there was the case of Vincent Chin in Detroit who was mistaken for a Japanese man and beaten to death. There was a lot of racial tension involving Asian Americans. Our organization was there to be a watchdog on the news coverage. If there were racial slurs or racial improprieties that were on the air or in newspapers, we would call out the different news organizations. We began to create a national voice.

Through that, we’ve been able to create a wide and supportive network and offer scholarships to young people of all colors –- it’s called the Northwest Journalists of Color Scholarship. We give out three to five scholarships a year to encourage young people of color to study journalism and communication and get into the industry. So many times, Asian American families tell their kids to become a doctor, a lawyer, an engineer –- they never say, please become a journalist! We want to encourage those young people who want to become journalists. We’ve been giving out scholarships since 1986, so our chapter has given out more than $100,000 over the years.

And how about all the community activism you’ve spearheaded over the years?

My co-anchor in the 1980s, Mike James, was on the board of the Asian Counseling and Referral Service. He said, “Hey, there’s this organization, they’re looking for board members, would you like to think about it?” I joined the board and that was my introduction to being a board member of a community organization. Since then, I served on the boards of the JACL (Japanese American Citizens League Seattle Chapter), the Seattle Chapter of AAJA and the YMCA of Greater Seattle.

And you co-founded the Japanese Cultural & Community Center of Washington.

Yes, at the time, Kip Tokuda was a state representative and social worker. Ron Mamiya was a municipal court judge. The three of us put our heads together and said, “Wouldn’t it be great if we had a Japanese cultural center here?” Originally, we didn’t know where it was going to be or what it was going to be like, but it would be a place where Japanese Americans and people from Japan come together and become friends. The three of us decided to get the community involved.

We got founding families to donate funds to match a state grant that Kip was able to get through the Department of Commerce. His pitch was that the state benefits in many ways from having friendships like this. We decided to have the cultural center at the historic Japanese Language School. For more than 100 years, it served as a community gathering place, built by the Issei. It’s the nation’s oldest continuously operating Japanese language school on the mainland.

When did the JCCCW start?

In 2003. It’s our 15th anniversary this year. That’s why we’re having a gala. We usually have a luncheon, but this time we thought we’d do it big because it’s a special year. (The Gala will be held on March 31 at the Hyatt Lake Washington in Renton. For reservations and more information, go to https://www.jcccw.org/events/2018/3/31/)

In life, you realize you can accomplish a lot of things by joining others and working for the community’s benefit. I have always focused on families and children, and now I’m focusing on Japanese culture. I feel grounded knowing about my culture and heritage. That’s very important to me. I want my son to know where his family comes from. And what better place than at a community center? There are so many people who feel the same way.

What is one of your career highlights as a journalist?

It’s been a fantastic run. But I think last year, 2017, was very significant. It was the 75th anniversary of the signing of Executive Order 9066. This was the executive order that put 120,000 Japanese and Japanese Americans on the West Coast into incarceration camps during World War II. It was a huge constitutional crisis for the United States because the government was putting innocent citizens in camps for no reason and without any sort of due process. I was able to present a body of work about it. It was a five-part series of stories that explored how that executive order affected people here. The first story dealt with going to camp. What was it like? The second story dealt with what happened after camp when they came back. It was very difficult. The third story dealt with a little known conflict between Japanese American families that really divided them for generations: Who was more patriotic, the Japanese Americans who volunteered for the army or Japanese Americans who resisted, challenged it in court and got sent to jail? Even today, some of the families don’t talk to each other. They are still divided.

The fourth story dealt with how people here in Seattle worked for redress. They wanted the government to apologize and pay money to people who were incarcerated. It was a huge political undertaking because it literally took an act of Congress to establish it. But there were movers and thinkers and organizers here in Seattle who started the ball rolling for the whole country. There were very important individuals here who carried the torch and got the bill passed by Congress and signed by President Reagan.

Finally, the fifth story dealt with how the story is being re-told today. Here in Seattle, we had wonderful examples of people telling the incarceration story through visual arts, opera, spoken word poetry — so people don’t forget.

KING allowed me to do the five stories and a half hour special where we actually went back to Minidoka with people who lived there as children and heard their stories. What was it like for them to live there and how do they feel now that they are back?

It was very special. I was able to use videos and interviews that I had collected and saved for the last 30 years. All these events — redress, the opera — happened throughout the years, and I would just keep the video, thinking someday I will make a really big project. And it finally happened in 2017. It was called “Prisoners in Their Own Land.” We asked the question, could it happen again? It could, if we’re not careful, if we’re not vigilant.

is a registered nonprofit organization formed in 2003 with a mission to build and grow a central gathering place for sharing and promoting Japanese and Japanese American culture and heritage. JCCCW include s the Seattle Japanese Language School and the Northwest Nikkei Museum.

Tomodachi Gala will celebrate the 15th anniversary of JCCCW and bring the community together to support the Cultural Center and its programs.

The Suitcase Project Travels to Seattle