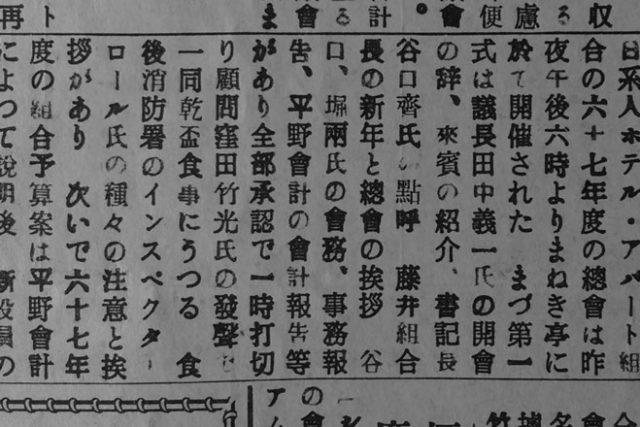 The Nikkei Hotel Association hosted its annual general meeting at Maneki Restaurant last night. In the first section, Yoshiichi Tanaka opened the meeting with a greeting and President Fujii gave a New Year’s greeting after guests were introduced and Taniguchi, secretary, called out the names of members. Taniguchi and Hori reported the activities of the association and Treasurer Hirano also updated its account situation.

After all approved the reports, the dinner began with a toast by Takemitsu Kubota, an advisor of the organization. A Fire Department inspector also presented recent updates and gave some cautions for the real estate business.

After Hirano explained the association budget, new officers were elected for 1967 as follows:

Kawabe greeted members as the new president and Seiichi Hara was recognized and presented a special gift. The second section was led by Izo Kojima to entertain several performances and also hold a raffle.