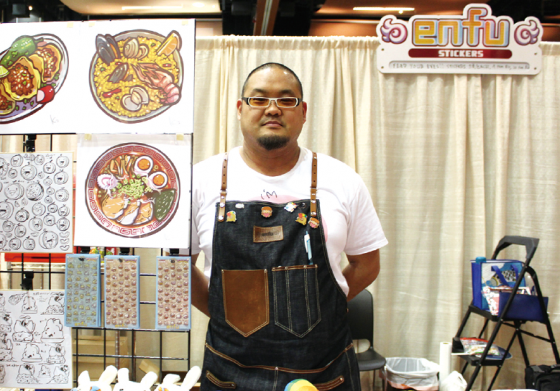 Ken Taya, or Enfu, as he is known by his fans, is one of the most prolific pop artists in the Puget Sound region. His bright, iconic images are found on restaurant walls, grocery bags, utility sheds in the International District and on posters, stickers, prints, stuffies, hats, hairbands and books available at Kobo at Higo, Kinokuniya, Pink Gorilla, Giant Robot and other retailers. His work explores cross-cultural issues at times, but he’s also capable of creating work as light and sweet as cotton candy. He’s a constant presence at Japanese festivals and comic conventions up and down the West Coast, plus he’s also a skilled video-game designer, having worked on hit games such as Scribblenauts and Halo 3. Born in Chicago and raised in Delaware of Japanese parents, Taya moved back and forth between Japan and the US during his student years. He’s now settled in Bellevue with his wife, Ikuko, and daughter, Erika. The North American Post caught up with him at his Bellevue home to chat about life and art.

One of the reasons I am so thankful for my connection to Giant Robot and Eric Nakamura is that I didn’t know I could be an artist until I saw Giant Robot magazine. I saw Asian artists on the cover. I remember seeing it late my senior year at UW. I thought, Oh, Asian American artists exist. I didn’t really go to museums. It wasn’t something I cared about. Then you see pop culture and Asian Americans doing it, and you think maybe that’s something I can do. That became the opening. That’s when I started thinking about it. I was working as a freight forwarder at the time, and I thought, why am I staring at the clock, waiting for it to be 5? I was very aimless, going through the motions, not sure what to do. But I was definitely sure I didn’t want to do what my dad was telling me to do!

I always liked art, and I gave myself permission to do it after college. I had an interest in architecture at UW, but I saw all the architecture students sleeping underneath their desks. I thought, I don’t want it that bad. But I eventually came back to it by doing 3-D environment video games, which is the most fun part of architecture — the concepting and modeling and building out.

I thought to myself, what are two things I like? I like Japanese things and video games. What can I do with that? What company represents that? Oh, Nintendo. I googled it and found there was a school that helps you get into Nintendo called Digipen. I started drawing more to get ready for the art test. I got in and went there for two years. Didn’t graduate. In art, your degree doesn’t matter as much as your portfolio. I’d rather spend extra hours working on my projects. That was 15 years ago. So I’ve been in video games for 15 years.

I worked at Zombie first, then NST, then Monolith, then Bungie. Then I went to 5th Cell, DoubleDown and NC2 Media. I jump more than most, but people do move a lot because of instability in the industry.

When I was in elementary school, my Dad got a job with Tohoku University, so we went back when I was in 7th grade. We were going back intending to live there forever, which I was initially excited about because it was change and I was a kid, and I thought, “Oh, I’ll finally be accepted as one of them.” You know, kind of naively. I grew up in Delaware, so my Japanese learning was stunted because there was no Japanese community. I started Japanese school a couple of years late, so I was behind in language. I committed all these faux pas. The scariest PE teacher had a punch perm, a really bulky dude. He pulled me into a room and said, “Teach me some English slug.” He was trying to say “slang,” but I thought he was saying, “slug,” and I was thinking, why would he be asking me about American slugs? I would draw a slug on the chalkboard, and he’d say, no, no, no. He was just frustrated and couldn’t get any cool information out of me.

Thinking back on it, I wonder how could I make those mistakes? On the first day of school, I probably had been coached about not wearing your outside shoes inside, but I was wearing bright yellow Converse high tops, and I just walked all the way to the fourth floor. People thought I was a rebel, but I was just clueless. Another instance: I was trying to get the teacher’s attention and trying to figure out how to say, “You” in Japanese. I raised my hand and said, “Kimi!” (a very informal way to say “you”) It was one of those Chibi Maruko moments where the whole class turns around and goes, “Ohhh!” Everybody’s looking at me with their mouths open!

These episodes show how broken I was from not fitting in. I think they influenced my empathy and identity. I became more caring to foreign exchange students who had heavy accents in our high school (in the US). I became more involved in the international club and got to know foreign students that way.

Sendai was tough. I went from 6th grade to the first year of middle school. I remember a moment in 6th grade in art class. We were all painting. The teacher gave me his paint set and saw me paint. He said, “Are you sure this is your first time? Because you’re really good.” That stuck with me. A little compliment in a sea of depression. I always liked art, but that made me think maybe this is something I could run to.

One time, I went crying to the teacher, saying, “I can’t take this anymore. Everyone is making fun of me.” The teacher called the class together and made everybody stay after school. He told me to stay outside in the hallway. He closed the door and just started yelling at the whole class. I could hear him yelling. “You guys can’t speak English. Why don’t you go move to America right now? Why don’t you pack your bags?” It was very strong language. “Let’s see how well you do. I want to see you try.”

I couldn’t handle it, so I ran up the stairs to the fourth floor near the rooftop opening. A couple of the guys came to look for me. And pretty much, the tide turned from there. “We were wrong. The teacher’s right. This isn’t your fault.” It was a good turning point. The teacher being a big advocate took a huge weight off my shoulders. He was the same teacher who complimented me on my painting.

But eventually, my dad said, OK this isn’t working out. This wasn’t well thought out for the kids. My family’s not going to succeed here. We should go back. We went back and I started 8th grade in the same school. But I had such confusion with English. I forgot how to spell simple things. I forgot how to spell “of.” I was spelling it u-v. I became more shy and withdrawn. I eventually broke out of that, but there was some reverse culture shock.

Making things is how I recover. It’s fun for me and relaxing. Drawing is a very solitary activity. A lot of people see me as extroverted and talkative and bubbly, which I am, but I don’t think it’s black and white or binary. We’re shades of everything, Drawing is a way to be with myself. It’s my self-care time.

I used to do large illustrations that were 120 to 150 hours of work, like Nihontown. Long drawings that take forever. Then I’d be crunching at Scribblenauts until 4am, so I’d be dead tired. But I still had energy to draw, so I started drawing little things. I wanted small wins. Those eventually became things like Hamster Hawk. Hundreds of small things became thousands of small things. I created Enfusoft to help make those patterns. I started creating Lego bricks not castles. That’s how I saw it. Now I’m trying to curate those into sets of worlds in Enfutown.

I’ve been told before that fine art is just for you. If you truly want to be an artist, just paint and keep it in your garage. I’m more practical. I think art should be enjoyed by everybody. How does a stranger enjoy my art? I need to get it seen. It has to be put on walls, or make a game out of it. It has to be where they are. How do I get on the street, in a restaurant, in notebooks, in their phones. I need to be visible. That’s just the fundamental loop of human interaction. You create something and you can enjoy it yourself, but you can also get other people to enjoy it. You give them a flower and they give you a smile. I hustle out there at conventions because I see reactions in real time.

When I did my first Blue C Sushi mural, I filled it with everything Asian or hybrid. I put Uwajimaya in the background. It was a big safe space for Asians back in the day. That was the only place you’d see a lot of Asians. Either there or at church you’d see a bunch of people who look like you.

A lot of people ask me, “How do you think up all these things? How do you come up with all these ideas?” It’s really hard to answer, but my favorite thing is a blank piece of paper. Anything is possible. It screams potential to me.