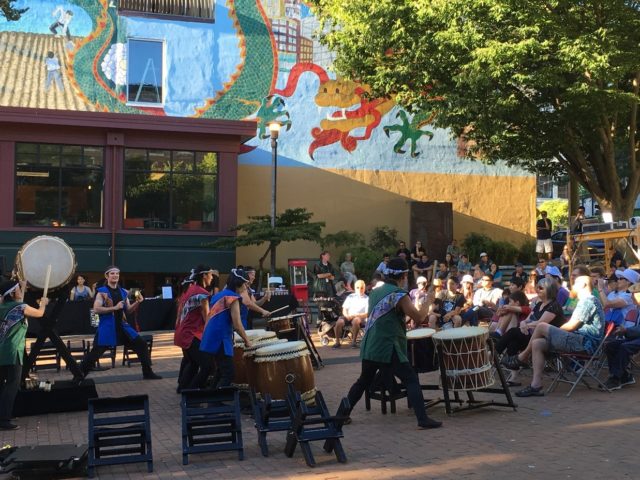 Hai! Japantown, a summer celebration in the International District, was held on August 26. The event was put on by Friends of Japantown to help revitalize Nihonmachi and remind the city of the neighborhood’s long history that was so brutally interrupted by the internment of Japanese and Japanese Americans during World War II. The festival was a reminder of the annual festivals Japantown used to hold.
The main stage in Hing Hay Park featured taiko performances, a screening of Disney’s “Big Hero Six,” which features a Nikkei protagonist, and an autograph session with the Seattle Storm’s Ramu Tokashiki.
The Mahouto Market, featuring anime- and manga-inspired art and goods by local artists, was held in the Nagomi Teahouse. Young cosplayers flocked here to browse, shop and take photos of each other.
There was also a walking tour called the “Nikkei Heritage Tour” hosted by the Wing Luke Museum in partnership with the National Park Service. This year marks the 75th anniversary of Executive Order 9066 that called for the imprisonment of people of Japanese descent. The National Park Service created a walking map to go with the tour. “The trail is not like a hiking trail,” said Wing Luke Executive Director Cassie Chinn. “You can’t see it. We connect important landmarks of the present Japantown to show on the map as a historical and educational guide. It will be registered at the National Park Service.”

Week of Tanoshii (fun!) at the 2019 JCCCW Japanese Summer Camp

Sharing Memories for the Future of Nihonmachi