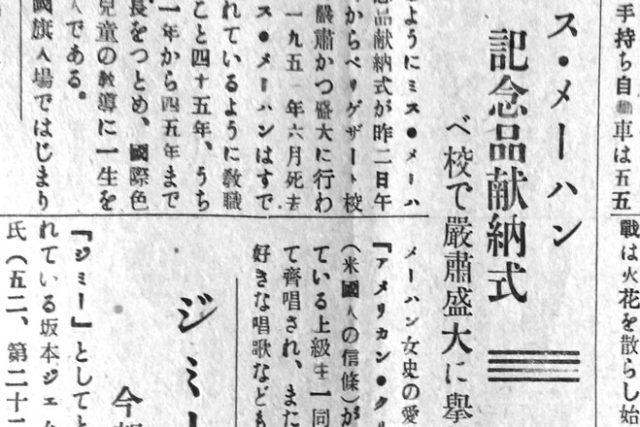 As reported, a special recognition ceremony for the late Ada Mahon was held at Bailey Gatzert Elementary School at 2 p.m. yesterday. Mahon, who passed away in June 1951, was known as a teacher for 45 years as well as principal of the elementary school from 1921 to 1945, serving to educate many ethnic-background students for much of her life.

The ceremony began with a color guard march, and the American Creed was stated by senior students, who attended the ceremony. Mahon’s favorite children’s songs were also sung,  reminding attendees of their days there.

Haruo Hosono and Raymond Chin gave recognition to Mahon, followed by an introduction of Mahon by Kaoru Ichihara, who worked as her secretary under her from 1932 to 1939. Dr. Susumu Fukuda presented 15 oil and water painting artworks to a student representative.

Robert Grant, a nephew of Mahon, and Principal Tony Allasina expressed their appreciation at the conclusion of the 45-minute ceremony. Over 30 graduates who learned from Mahon and other community members shared a great moment.