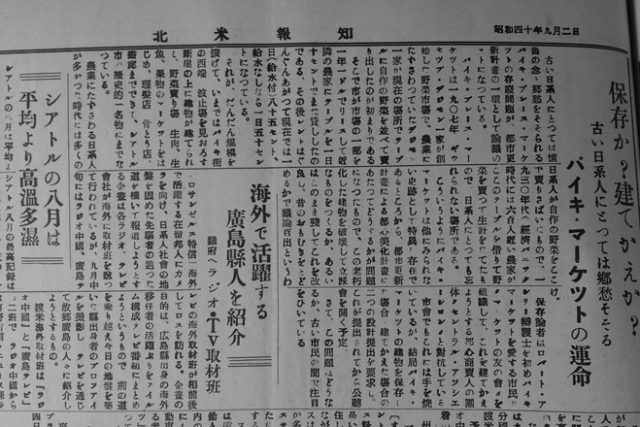 Old Japanese Americans may remember the days of Pike Place Market, but the site has been a hot topic in the Urban Development Planning.

The Pike Place Market was founded in 1907 when a farming family began selling their vegetables at the current location.

The market has expanded around the building located on the hill viewing the Waterfront at the west edge of Pike Street. The market has become one of Seattle’s historic sites, having vegetable, meat, seafood, fruit stores and other businesses including barbers, antique stores and bookstores.

The Urban Development Planning’s recent clean-up project raised an issue about how the unique and historic place should be cared for and whether to build a new building after demolishing the old site or not, to keep the nostalgic atmosphere.

The Friends of the Market, consisting of local market fans, has been protesting the urban real estate Central Association’s development plan.

The City council cannot find the right answer yet but offered both groups to share their comprehensive plans. The issue has been placed in the spotlight by old citizens.