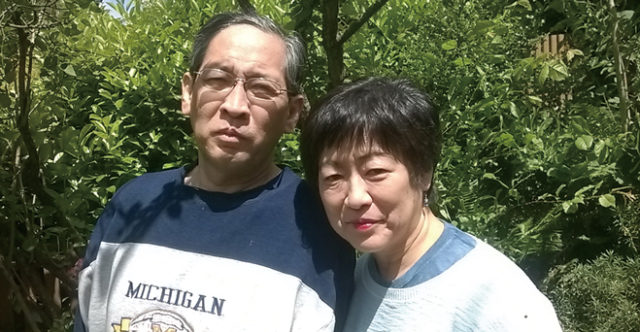 In mid-May, I reconnected with Elaine Kitamura and her younger brother, Darrell Kitamura, through a friend of a friend. The Kitamuras are the siblings that sat in the ticket window of the Kokusai Theater, on Maynard in the International District, until it closed its doors in the late 1980s.

While I overlapped with both at Cleveland High, until our recent meeting we had not previously talked in depth. For in those days, like many Sansei, the three of us were shy. Moreover, in the naïve way of youth, I had thought that the Kitamuras were different than “ordinary Sansei” like me. They seemed “too Japanese.” (Recall the Nisei school-day versions of this in Nisei Daughter.) For example, in Japanese class, Elaine had been the only one who knew what was going on, while all the rest of us were clueless.

Of course, as adults the three of us just laughed, and launched into a two-hour conversation on our first meeting. Elaine mentioned my family’s rice shop, a block from the theater. The reality is that on the spectra of Seattle people and of Sansei, the three of us shared similar formative life experiences, and are quite alike today.

To visit the Kitamura family home is to enter a vanished world. The first thing that strikes one are the wooden mon—the family crests—that adorn the second-floor balcony. It is the sort of platform from which one can imagine samurai women archers raining down arrows on invading troops.

“My father built it that way,” Elaine says.

Also unusual are the old movie posters decorating the walls of the home.

The most striking thing, however, is the lightning-fast near-native Japanese with which Elaine—and to a lesser extent, Darrell—converses with her mother, Mitsuye. Growing up I had thought that all children of first-language Japanese parents talk like that. Today, after much more interaction with the adult children of Kibei-Nisei, I realize how exceptional the ability of the Kitamura siblings is. How had their parents accomplished this?

Certainly the family business of showing Japanese movies had helped. Elaine added that growing up, their customers had mainly been Issei and Nisei.

“If you wanted to eat in this house, you spoke Japanese.”

Elaine added that in elementary school she had been required to attend a special speech class to bring her pronunciation of R’s, L’s, and th’s up to speed. And this is for someone born and raised in Seattle! (The current consensus on the topic is that bilingual children grow up deficit in both languages at first, but eventually gain through achieving competency in both.)

My main question for Elaine and Darrell: had they enjoyed the family business?

Darrell’s answer: “I was mesmerized by those movies.” He had been impressed “that there had been such a time in Japanese history.” He was referring to the chanbara samurai films that were popular in the 1960s and 1970s.

Elaine added, “There is nothing like watching movies on the big screen.”

Their father, George Tadao (deceased in 1976), and eldest brother, Lance (deceased in 1998), had run the 35-mm projectors, along with Darrell, while their mother managed the theater, especially after the father’s passing.

According to Elaine, to operate the theater as a family, they ate in shifts at Tai Tung restaurant, a few doors away. Following the schedule laid out by her father, they worked showing Japanese films on Friday, Saturday, and Sunday nights, with an added matinée on Sunday.

On Monday and Tuesday nights, another family showed Chinese films. On Wednesday nights the Kitamuras showed Filipino films. On Thursdays they rested.

“We were multicultural before it was cool,” Elaine says. Thus, the name of the theater—Kokusai, which means international—was fitting.

Darrell added: “We didn’t always work. Sometimes we were just sitting in the theater, watching movies….

“It was like the bar in ‘Cheers.’ We knew everyone…. Those were good times.”

The pair’s interest level is also reflected in the remarkable degree to which both remember the old Japanese movies. When I remarked how one film I especially remember seeing at the Kokusai is “Goyokin” (1969), owing to its scary beginning, the two knew it instantly.

Goyokin opens on a young woman returning to her Japan-Sea village after an extended absence, only to find that all its former inhabitants had vanished.

“Dareka ga oru ke!” she calls in vain into the abandoned buildings in local dialect. Is anyone here?

Darrell replied, “Oh, that wasn’t so scary” (even though he is two years younger than me). And then the siblings recounted the tale’s lead actors: Asaoka Ruriko as the sole survivor; Nakadai Tatsuya as the samurai who knew the villagers’ fates…

It was technology—the appearance of VHS tapes and later DVDs—that killed the Kokusai Theater. Across this interval, its ticket sales continued to fall, despite the family’s efforts.
Sensing the impending end of the theater, the Kitamuras decided that the family business wasn’t something that youngest brother, Zen, needed to get involved in.

The Kitamura family eventually sold the theater building. It next made the news when the new owners failed to keep an eye on its flat roof after a heavy snowfall, leading to its collapse. The new offices of the Northwest Asian Weekly occupy the site today.

The Kokusai Theater lives on in the minds of many of us who grew up watching movies there. It positively influenced our lives through impressing on us varying degrees of Japanese history and culture which we would not otherwise have been exposed to. Across the past twenty years, whenever I have asked fellow Sansei why they were attending or volunteering at a Japanese cultural event, a common reply has been a variant of, “I grew up watching movies at the Kokusai Theater with my grandmother.”