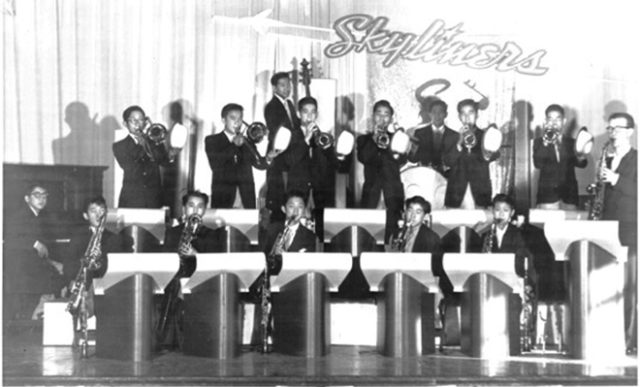 By Keiko Kay Hirai
For The North American Post

I stood in front of the Seattle Buddhist Church, all dressed up in my new, pink sweater and full skirt with pink and grey checks. The black, patent-leather Capezio flats felt a little tight, but I didn’t care. My big hope was that I would fit in with the rest of the girls.

“Kay, I’m here!” called out my good friend, Janet. Looking so adorable, she stood on top of the stairway in front of the church’s gymnasium door. Her skirt was identical to mine but, instead, had blue and grey checks. After admiring Janet, who stood there looking so petite, it made me wish that I was a little more diminutive in size.

“Are you wearing three layers of crinolines under your skirt tonight?” Janet asked, with a twinkle in her eyes.
“Yeah, I starched all three and hung them out on the line to dry. Do you think my skirt is puffy enough?”
Janet gave me a nod of support, “Yes, you look great.”

I was grateful that I had Janet as my friend. She always made me feel good whenever I was with her.
As I walked toward the entrance of the gymnasium, I heard the rhythmic sounds of drums beating and the bellowing notes of trumpets.

“Come on, we need to get our tickets and go in. The Skyliners have already started their practice session,” Janet said, as she motioned with her hands, encouraging me to hurry.
As we entered the large gymnasium, I saw the white outlines of the basketball court on the floor with the netted hoops looming high in the air at both ends of the room. Despite the musty odor and sparse décor that usually accompany a gymnasium, I was immediately immersed in the feeling of romance. The sweet smell of the powder worn by many of the girls added a nice ambiance to the space.

All of the girls sat on one side of the room dressed in their pastel-colored sweaters and full skirts that bloomed out like giant mushrooms. As was common in those days, all of the boys sat on the exact opposite side of the room, seated on wooden benches that stretched from one end to the other end of this large gymnasium to the other.

Then, came the moment that everyone had been waiting for since they arrived at the church. The stage lit up with bright lights and Mr. Don Kinsley, the band’s leader, faced the crowd and made the opening announcement, “Good evening! We are the Skyliners and we will be playing a selection of our favorite tunes for you tonight. Before we begin, I’d like to introduce all of the members in our band!” Everyone quickly got up from their seats and started clapping enthusiastically.

Even though I knew otherwise, Mr. Kinsley looked like he was only a few years older than the boys in his band. His golden, blond hair, which glimmered under the stage lights, was a nice complement to his freckled face and blue eyes. He had a pleasant and easy-going way about him that made everyone feel at home.

“Kay, this is so exciting, isn’t it?” Janet whispered into my ear. I nodded my head in agreement and was in awe of all the young men of Japanese descent on the stage. With their clean, shiny faces and thick, black hair, coated with pomade, they looked amazing.

Each wore a light blue, musician-styled jacket with a tie, black slacks, and dark shoes that looked as if they were spit-shined just a few minutes ago. This was an attractive group of very cute boys.

Similar to other big bands of the era, each band member sat behind a professional bandstand on risers that had the “Skyliners” name sweeping across the front in fancy, stylized letters.

Mr. Kinsley continued, and introduced every band member. As the names were announced, the clapping from the audience got louder and louder. From the different levels of enthusiasm, it was obvious that some of the band members were more admired by the girls than others. To me, however, they were all handsome.

Suddenly, the room went completely silent as Mr. Kinsley arched his body and made a precise and forceful circle with his hands and arms. The band members followed his lead and started playing their opening song, “Tuxedo Junction”…a tune so smooth.

Once the band started playing, some of the boys made the slow walk across the gymnasium floor in search of a girl to dance with. Many of them, however, knew exactly who they wanted as their dance partner, so their pace was a little quicker than the rest.

When the first fast tune was played by the band, Janet was one of the first girls to be approached by Dicky, who was known in local circles as the “King of Dance.” I watched Janet and Dicky twirl and twist, showing off their intricate steps in the middle of the dance floor. They were so good that they seemed to intimidate everyone else. Many of the couples simply walked off to the side to watch. Before long, they were the only couple on the floor, with everyone else admiring their steps. I enjoyed watching Janet tuck herself under Dicky’s arms and then break out into a dance routine of her own. Her three layers of crinolines didn’t stop twirling even when she stopped dancing. I wished that I could dance half as good as Janet.

Mr. Kinsley announced, “Our next song, “Teach Me Tonight,” features Ir Yoshimura on tenor sax. When it was time for Ir’s solo, he stood up in front of the band carrying a saxophone that appeared to be as big as he was. He had a serious look on his face and appeared totally focused on his shiny instrument. His black hair was thick and coarse. I wondered how he could make his hair look so slick.

As he stood in the limelight and blew the first burst of air from his mouth to the sax, the most irresistible, low sounds from the rich tenor filled the gymnasium. “Ohooo…” everyone rumbled. After Ir finished playing the sexy, lilting sounds of “Teach Me Tonight,” everyone seemed mesmerized, but at the end, eagerly applauded his performance.

I saw a boy slowly walking toward me from across the room. My heart skipped with anticipation. It seemed like forever but he finally stood in front of me and asked with a shy look on his face, “May I have this dance?” I slowly stood up and walked onto the dance floor with him. When the sound of the music picked up its pace, we intuitively swung into the steps of the Jitterbug. Although he was not the best in keeping up with the beat of the music, I was happy to be dancing instead of sitting on the bench, being a “Wall Flower.”

Later in the evening, Mr. Kinsley announced, “Our next song, ‘Early Autumn,’ features Vic Kihara on trumpet.” Vic was tall, slender, and handsome. When it was time for the solo, he stood up erect and then threw his head slightly back, wetting his lips and positioning his trumpet. Soon after, the sweet, forceful tones from his trumpet filled the gymnasium and all of the girls swooned and let out a sigh.

A few of the other band members delivered equally skilled performances on their respective instruments and the crowd showed their approval by clapping after each solo.
Janet came back to the girls’ side of the gymnasium after another one of her dance routines and said, “It’ll be break time soon for the Skyliners. That’s when the members will be dancing with the girls to the sound of recorded music.”

Susanna, a girl who sat next to me, whispered into my ear, “I hope I’ll get asked to dance by one of the Skyliners!”

By the time the dance came to a close a few hours later, I was definitely overwhelmed by the experience of hearing the Skyliners for the first time. Like all of the girls in the gymnasium, I could hardly wait until their next performance so that I could see the band again and listen to their magical music.

Just like Susanna, I secretly hoped that one of the band members would ask me to dance the next time the Skyliners played.

Editor’s Note: Kay Hirai is the author of “Yumi’s Life Lessons, How to Empower Yourself and Turn Every Day into a Happy Day.” Signed copies may be purchased at Kay’s salon, Studio 904 on Mercer Island or online at amazon.com and chinmusicpress.com.

Jazz Alley has plenty of Japan in its lineup