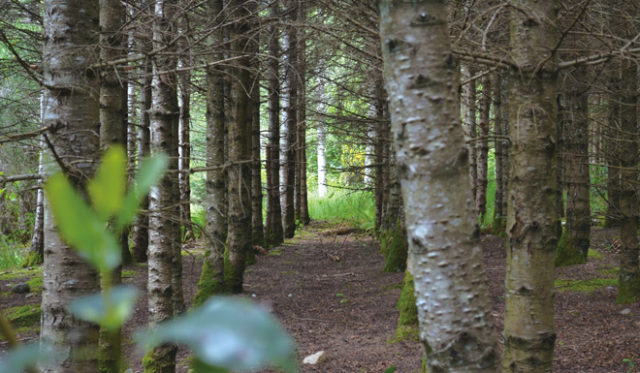 The end of last month, for the first time, I embarked on the Bainbridge Island ferry on foot. So many memories paint the walls of the ferries of pier 52, though it is the Tacoma ferry that I remember most. The sun shone on deck the way people smile at old friends. But the wind whipped clothes and long hair in every direction, so it was a short while before my mom and I retreated to the cabin below.

On the other side, my mother’s cousins met us. To me, Bainbridge Island has always consisted of three locations: the ferry dock, the cemetery where my great Aunt and Uncle now rest, and the Christmas tree farm where they lived. This last location was always, of course, the primary reason for my family’s annual trip to the island. We drove around the island of memories. We talked of life in the here and now and reminisced about times during and before, and way before, my lifetime. I tried to imagine the trees and farm-lined roads for what they might have been to those who grew up there. I remembered so many winters hunting for the perfect tree smelling of Christmas and wet earth.

The times I recall most fondly are the muddy Decembers when my parents would drive onto the ferry with my brother and me excitedly in tow. We would go all bundled up in puffy jackets and, while “those old folks” chattered away indoors, my brother and I would tromp around the giant mud puddle out back. With rusty shovels weighing half as much as us, we would dig and stomp the puddle into streams of cold, brown, and watery rivulets. I remember making tiny reservoirs and little mud mounds beside them and watching the mounds sink into the mudscape as I broke the mud dam and flooded the mud towns with all the imaginary mud people. Needless to say, my brother and I were content enough on our own so long as the Northwest gray overhead delivered on its watery promises.

Those memories now sleep in the loamy soil. I walked deliberately through the farm and took note of the tractor, now much smaller than I remembered, and the tall trees that had once seemed more of a forest than a farm. The straight line of trees tell the tale of coarse hands that, once upon a time, nurtured little saplings into tall, strong evergreens.

So many families like mine have lived on Bainbridge Island and, while I only ever knew short day-trips, I could feel what it must have been like to have your heart rooted to the land on which you grew. I visited the Bainbridge Island Japanese American Exclusion Memorial for the first time. As much as visiting the farmstead and, more importantly, the mud puddle, was an experience of the past, visiting the memorial was a new experience to recall an old injustice. The slow slope and river-like bends of the memorial’s wall guided me through name after name of those who were forced from their homes at a time about which I can only retrospectively learn. Those names, somber in the shadow cast by the bright afternoon sun, are titles for chapter upon chapter of loved ones and the lives of hardship and ultimate gaman they led.

While the mud puddle served me a memory of lighthearted fun in the cold and wet, I returned to Seattle thinking of the families–not so different from mine with children who, too, loved to play in the mud–immortalized on the Bainbridge Island Nikkei memorial. Those families boarded a different ferry in a different time not returning to the Seattle I know and love today, but away from Bainbridge Island: the place each once called home.

The Crow Story at the Bainbridge Island Japanese American Exclusion...